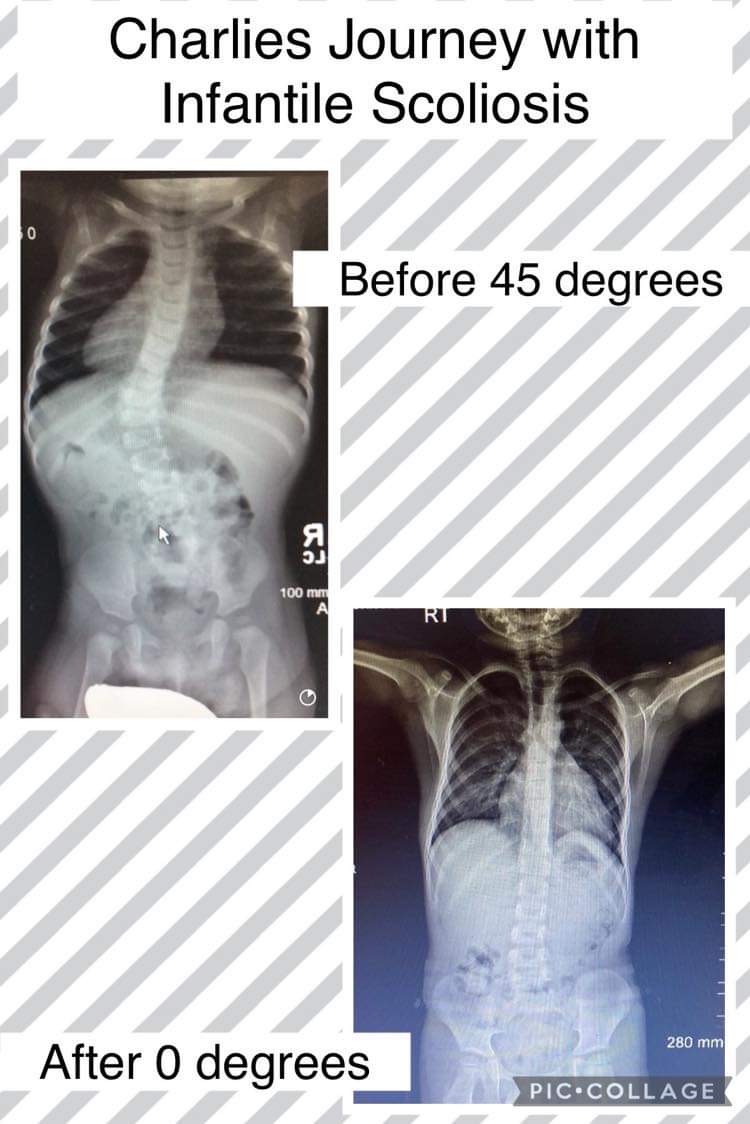 Little Charlie was born full term via normal delivery on July 11th 2015.  He is our fourth child and we were all besotted with him.

Soon after Charlie was born I noticed his back was a ‘funny shape’, but I was afraid to say to anyone in case my fears came true.  I was so anxious inside.

When Charlie was just 3 months old my husband was feeding him, and while burping him he noticed his back just wasn’t right.  He told me his concerns and it was at that moment my fears became reality.

We saw the pediatrician at our local hospital who agreed that Charlie’s back looked ‘off’, and she arranged an X-ray for him.  After the X-ray I was brought into the pediatricians office.  I could immediately see on her screen that there was a curve in Charlie’s spine.  I was absolutely devastated.

We were then referred to the main Orthopedic hospital in Northern Ireland and we were advised to watch and wait for the next 3 months.
Three months passed and we were back for repeat X-rays to see if the curve in Charlie’s spine had progressed or not.  He was just 7 months old, and X-rays showed his curve had progressed from 28 degrees to 42 degrees in just 3 months.  We were absolutely devastated.  All I could think about was “Charlie needs his little spine to grow”.

We were told Charlie needed to go into a plaster jacket that would be changed under general anesthesia every 6 months, until he would be old enough for the first of many invasive spinal surgeries.  We cried for days.  We never wanted this for our baby.

Once the news sunk in, we began to research.  We wanted to see what the plaster jacket would look like.  After joining the Infantile Scoliosis Outreach Programs (ISOP) Facebook Group, I quickly saw there were different types of casts!   That’s when I began to question what these differences were.  ISOP’s Facebook Group taught me that some casts are designed to hold the curve while others are designed to correct the curve gently.

For us, it was a no brainier.  We had to choose MGGC.  We wanted to try to correct the curve in Charlie’s spine, and potentially avoid him needing surgery.

After many phone calls, emails and endless days and nights of research, we soon realized that MGGC was not offered here in the U.K. or Ireland.  The closest hospital to offer this treatment was Shriner’s Hospital for Children in Philadelphia, USA.

Yes it was a huge distance, but we were willing to do whatever it took to give Charlie the best chance to avoid invasive spinal surgeries.

Thankfully after a very speedy application and approval process, Charlie was accepted for treatment at Shriner’s Philadelphia.
We traveled from Ireland to Philadelphia in April 2016 when Charlie was just 9 months old.  We met with the incredible team who would be treating Charlie, and we instantly felt a huge relief knowing he was in the hands of an experienced Doctor who specialized in Early Onset Scoliosis and Mehta Casting.

Charlie had an MRI of the full spine which thankfully came back normal, and he was ready to begin treatment.  His curve was now 45 degrees, and he got his first cast under general anesthesia.  As parents it was a shock for us to see our tiny little baby wrapped in a plaster cast.  But after the first day we soon realized that this special cast wasn’t going to hold Charlie back from meeting his milestones and doing what he wanted.

Over the next 2 years and 2 months Charlie received a series of 12 Mehta casts all under general anesthesia.  We would fly back and forth across the Atlantic every 8 weeks so that Charlie could have a new cast applied.
Throughout his treatment he had regular X-rays to check how his spine was responding to the casts.

In June 2018 we received the news that we had hoped and prayed for, that Charlie’s curve was down to 9 degrees standing out of cast with a fully relaxed spine.  We were just bursting with joy.

Charlie then graduated to a full time brace which he would wear for 23 hours a day until he would outgrow the brace.  Over the next 2 years and 4 months Charlie a total of 3 full time braces.  And in October 2020 it was agreed that Charlie could move to night time only bracing because his spine was holding at 8 degrees.

For the next 9 months Charlie enjoy his new found freedom during the day, and continued with bracing at night.  He then began to outgrow his brace, and we decided to X-ray him in Dublin Ireland and send the results across to Charlie’s Doctor at Shriner’s.

To our amazement Charlie’s spine was completely straight!  There was no measurable curve!  This was the day we had hoped and prayed for since our journey with Charlie began.  Charlie was finally cast and brace free for the first time in over 5 years.

Its been 13 months since Charlie was last in brace, and he is still monitored by X-ray every 6 months or so.  At his last check he was still holding steady.

We will be forever grateful to Dr Min Mehta for developing this gentle non invasive treatment to help guide our little warriors to grow straight.